The story of A Taste of Alaska Lodge began when Walter Eberhardt and his wife, Dorothy, moved to Fairbanks in 1947 and homesteaded 160 acres. 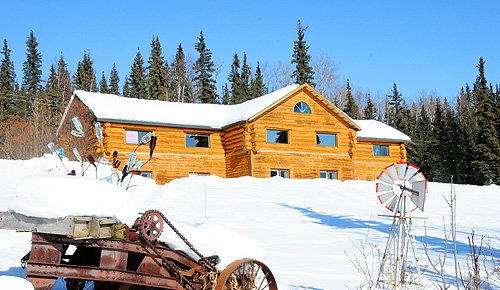 Walter came to Alaska from Idaho seeking employment and opportunity. They established a vegetable and hay farm, and Walter built a small house for them, to which he eventually built three additions and a basement.

Walter’s son, David, continued to expand the homestead, which now encompasses 280 acres. He and his wife, Debbie, founded A Taste of Alaska Lodge in 1992, and the main lodge was built in 1994. Dave and Debbie crafted a family homestead into a family business that brings joy to visitors from all over and year-round. Debbie collected antiques and artifacts that adorn the land and properties. She ran day-to-day operations while Dave provided maintenance and construction expertise, much of which he learned from his dad.

In 2010, Dave’s son, Kory, bought the lodge and now runs daily operations with his wife, Lily.  Kory was 7 years old when the business began, and he was eager to help out from the very beginning. He has lived and breathed A Taste of Alaska Lodge nearly his entire life, and he and Lily live in that same house his grandfather, Walter, built back in the 40s.

This lodge is a one-of-a-kind alternative to Fairbanks hotels, offering views of the Alaska Range, Mt. Denali, and Fairbanks in the distance. Visitors will get a first-hand look at Alaska’s natural beauty, including northern lights in the winter and wildlife year-round, all while enjoying the comforts and conveniences of cozy lodging.

Three generations of the Eberhardt family have built the structures that are a part of A Taste of Alaska Lodge. Each generation passed down skills to the next, and these skills are reflected in the character and uniqueness of each building. The Eberhardt family welcomes your family to their beautiful and secluded homestead.